On a very wet day trip to Leicester we wanted to escape to somewhere hot and sunny…….Egypt possibly. And so we entered the ClueHQ franchise to try our luck at The betrayal of Cluetankhamun.

We arrived early for our game and luckily managed to get into the building as someone else was visiting the company at the same time. (Did I say it was raining?)

While the other person was taken to a meeting,  we were shown into the company’s waiting room. A large, brightly lit area with chairs and tables and enough room to hold a number of groups. We were told they were just getting ready for us and to take a seat. Then the bright lighting was turned off so the room was in semi darkness.

Our Games Master arrived and welcomed us. He showed us the intro video and explained the locks used in the game. Good job we’d played a number of games because it was a bit dark to see the locks in detail.

Then he handed us our costumes and a satchel of clues and passed me a letter to read to my team. OK, in our case that was only one other person, but a full (in character, if possible) introduction from the GM  is usually better to set the mood for the game and get players immersed quickly.

Also, with the dim lighting, it wasn’t that easy to read.

So we were ready to begin. We knew our task was to enter Cluetankhamun’s tomb and find a mystical crystal.

Our first mission was to find the tomb/room.

What? Find the room, rather than being shown to our game? Yes, it appears the “immersion” starts with you hunting the escape room itself. Having found the toilets, we backtracked to the waiting room and set off down another corridor. Not a good start, truth be told. 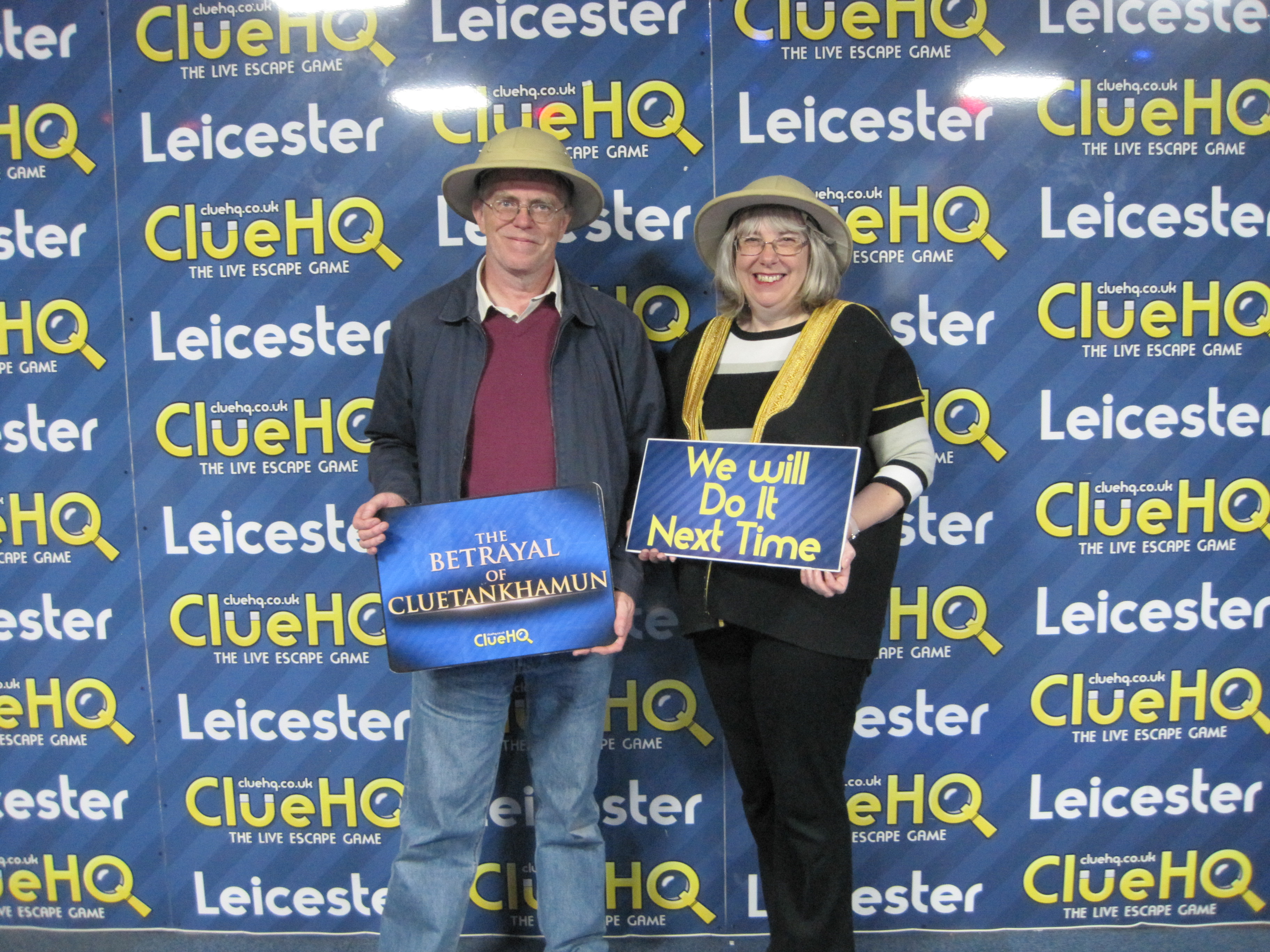 Just over a month ago the long lost tomb of Cluetankhamun was unearthed for the first time in over 3 millennia. A team of explorers were sent in to recover the Cluetan Crystal, a jewel believed to possess the power of the Nile. It has been several days since last contact with the exploring party so it’s time to send a new expedition down into the tomb to retrieve the crystal.

But watch your step – Who knows what happened to the last exploring party…..

Once in the room there was another video before we could start exploring. During the game, hints also came via the screen.

We made a quick search of the room and emptied the satchel, then began solving puzzles. Some were easier than others but most ended in a four digit code that needed to be entered in what felt like every lock in the place. With only two players, trying every lock got very wearing, very quickly.

We had been given a torch and, although the room was not particularly dark, the very limited light it gave helped to see the padlock numbers.

We had a few issues with a couple of the puzzles. One where the puzzle pieces did not match the puzzle chart. Another puzzle had been wrongly reset, so we had to be told the correct order of numbers.

And one puzzle failed to work because the computer system went down.

Consequently we wasted time pushing a button that didn’t activate anything and wondering what to do next. Behind the scenes (we discovered later) the system was rebooting so that the “unique feature” of Cluetankhamun that should have been triggered, came back online.

The “unique feature” occurs partway through the game where you are given a choice of two options. One has easy puzzles and one has hard. To make your choice a player has to crawl into a small space and choose a door. I struggled with opening the door, so my team-mate climbed in too. Very cosy. But maybe the team weren’t meant to ALL be in there at the same time.

We were not keen on the choice puzzle. It seemed to waste time trying to work out which course to take rather than letting you get on with the game.

Talking of which, the sand puzzles were frustrating and seemed primarily designed to waste time. Or maybe we were just fed up with all our time being taken up  trying every lock that, by then, even a different puzzle failed to impress.

There was a large prop in the room that was broken, although we never got to use it as we ran out of time.

When the Games Master collected us he said only 20% of 2 players teams get out and that we’d got further  than most. He agreed to take our photo, but didn’t offer us a company one.

Not the worst game we’ve played, as you can see from other reviews. But also not the best. Some nice puzzles hidden within an inundation of locks. A bit of a disappointment.

Want to join our mailing list and be sent details and offers for clue solving adventures and exploring city adventures? Just click the link and join the club