It had been a while since we’d played an escape room so when one of the team suggested we try out a new company in East London we jumped at it.

A short time later we found ourselves walking down a slope into what looked like a garage. At the end was the entrance to London Escaped.  Inside we found a large space with sofas, games and a TV playing. A great waiting area if you were taking a big group.

When booking, our team mate had been offered a choice of two rooms, although there are more available now, and had elected to play The Prisoner. This is a horror themed room where you have to escape the executioner nicknamed “Bloody Elbow”.

During the briefing we were told the room was difficult.

They also said they could make it scarier depending on the team. I asked if they could tone down the scares, and was told they turn them up for wimpy teams. Probably explains why other reviewers say they were screaming.

The Games Master included the usual comments about checking everywhere and not breaking the set. We were also warned that the room contained real props and needed to be careful how we handled things.

Then we were lined up outside the dungeon and hooded before being lead into the room individually.

This escape room appears to be aiming for the immersive experience rather than for the puzzle enthusiast.

The floor is strewn with straw and the lighting kept to a minimum. There are small (battery operated) candles to help you search the dungeon.  And the horror theme is reinforced with the torture instruments, body parts and realistic looking dummies.

The set design for the room was fantastic. Unfortunately I was reminded of another company that had fantastic sets and props but bad puzzles….. Luckily I did not feel as cheated with this game.

Looking back, we decided there had been a lot of searching and finding but not much deducing and solving. However, this was in keeping with the theme. Finding keys to escape rather than codes for combination locks made sense.

There was also one solution that required using a tool to physically destroy something in the room. This went against Standard Escape Room Rules and against the briefing of don’t break the set.

Again, in keeping with the room, hints came via whispered conversations from other prisoners. We were a small team who all kept quiet when the audio played, so we were able to hear the hints OK, but I’m guessing with a big screaming team this may be a problem.

I don’t tend to read the reviews until after I’ve played so I hadn’t noticed until later that another reviewer suggested if you are claustrophobic, or can’t stand being hooded, mention it to the Games Master at the beginning. During the briefing, when I’d asked if they could tone down the scares, I was told they turn them up for wimpy teams. So it takes a brave person to admit they are claustrophobic, or can’t stand being hooded, after being warned the GMs will make things harder ………

However, one of our team falls into this category and they had a big discussion about not wearing the hood at the start.

They also dislike being restrained and this game begins with the team being isolated and restrained in the inquisitor’s dungeon. While you could argue the clue is in the title –  The Prisoner –  it should have been fairly easy for all the team to escape into the main room, with access to an exit in case of emergency. This was not the case and resulted in genuine panic.

Yes we did complete the room and escape within the hour.

Disclosure: The Games Master had to come and unlock one member after fifteen minutes at the request of the team.

In case of emergency?

This raises the question of what would have happened in an emergency. What if the team could not release all members and the GM could not reach the room with an emergency key in time?

* Both London Escaped  and Nowescape state that escape rooms are simulated experiences and you can leave at any time.

* This room can also be played at Quest Room in Los Angeles as Bloody Elbow. Quest Room state “Yes, the doors will be locked, but we do have, built in, methods of exiting the room……for The Bloody Elbow we require all members to play through, until the end.”

Although all these websites say it is possible to exit the room, they do not indicate how teams release the restraints/cell doors in order to exit the room in an emergency.

This is not a new problem. We once played an escape room where the whole team were chained to a wall in a basement and the GM was on another floor. By solving puzzles were were able to release one member, but the rest had to wait another ten minutes for him to solve more puzzles and release us. It was only later that we began to question the safety of being chained within an escape room. That escape room (Hidden Rooms) has since closed. 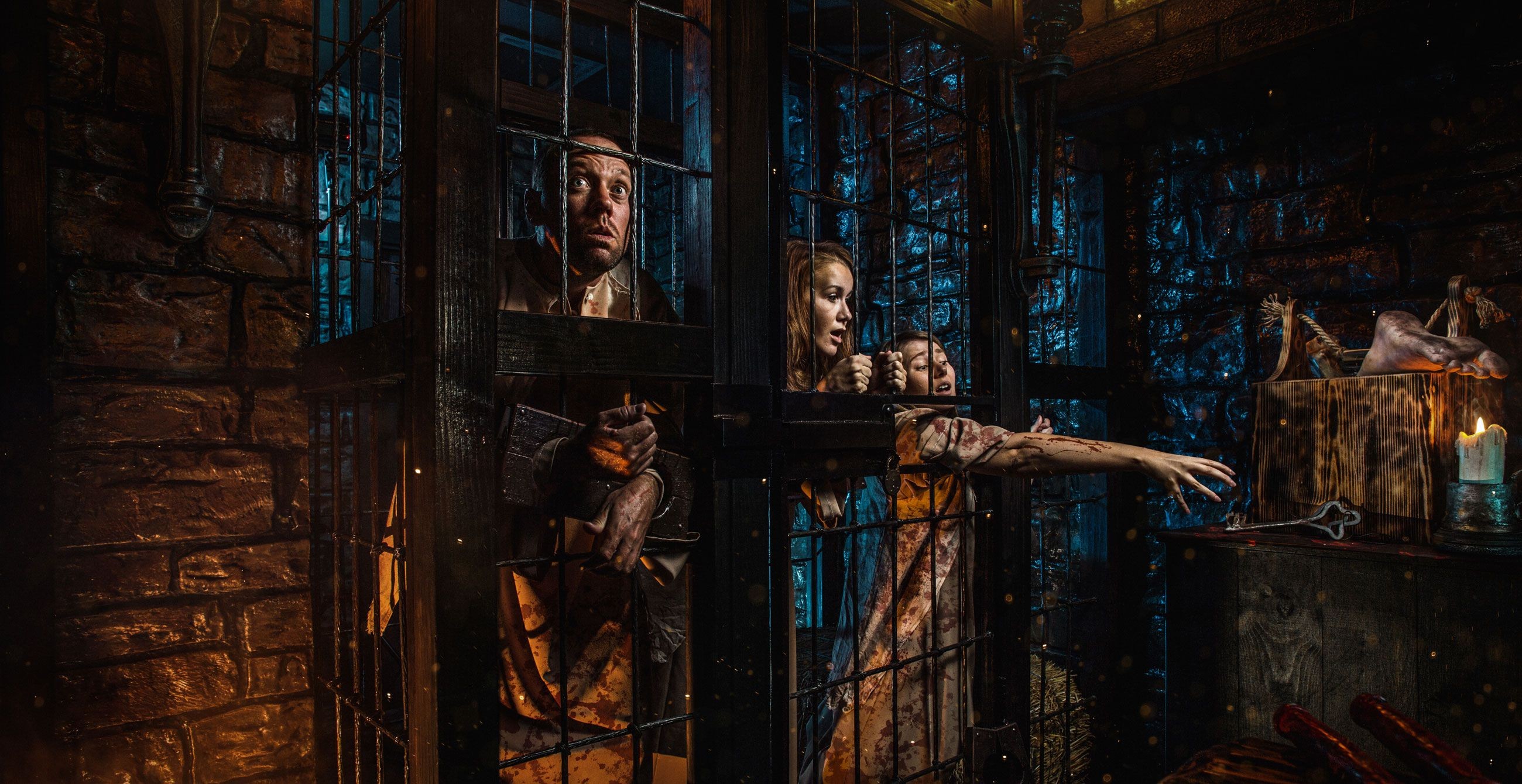 Photo from London Escaped as team photo not available.

What the company say to expect

“The Prisoner known as The Bloody Elbow. It is the time of the Holy Medieval Inquisition around the 14th century. You have all been accused of witchcraft and imprisoned awaiting your death by the hands of a executioner nicknamed “Bloody Elbow”.

He is infamous for his love of using horrifying torture to obtain confession of your crimes, this often lead to a slow and agonising death if you were lucky, “Bloody Elbow” has left you for a rest between the bouts of torture, this is your chance, you have 60 minutes to escape your hideous dungeon and change your fate forever.” – taken from website